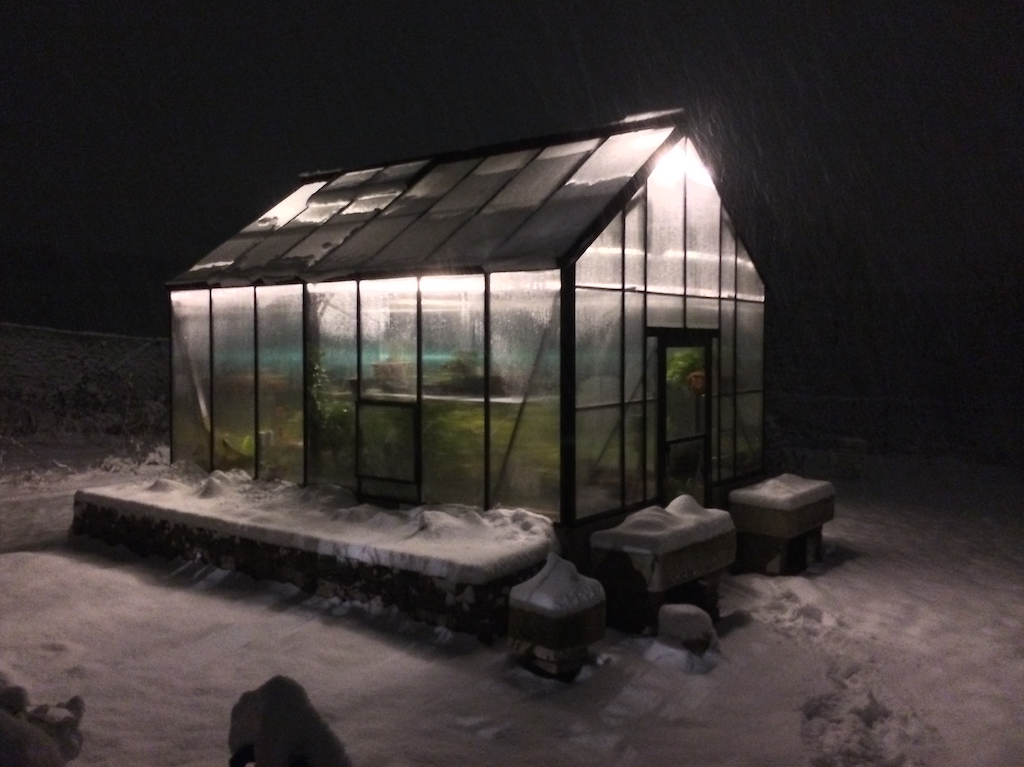 Many garden bloggers will recall that Gardening Gone Wild used to run a regular photo contest where people shared there images from the garden.   It was fun activity which encouraged one to take on certain challenges in photographing the garden.  Well, Saxon Holt, at Gardening Gone Wild has restarted the Picture This activity.  As a first challenge he has asked that we post our favorite photos from 2014 and select one for submission to the Picture This photography contest.  This actually struck a chord with something that I had been meaning to do anyway in response to the annual suggestion from Les at A Tidewater Gardener.  I post so many pictures in a year that it is somewhat of a task to go back through the years images and choose the best, but that being said here goes…

The picture of the Greenhouse is not so much a picture of high technical quality but one which captures a moment that sets forth the whole year.  We had a difficult winter that ended up making every flower that survived that much more of a special gift.  The other pictures are mainly of flowers that track the progress of the year. 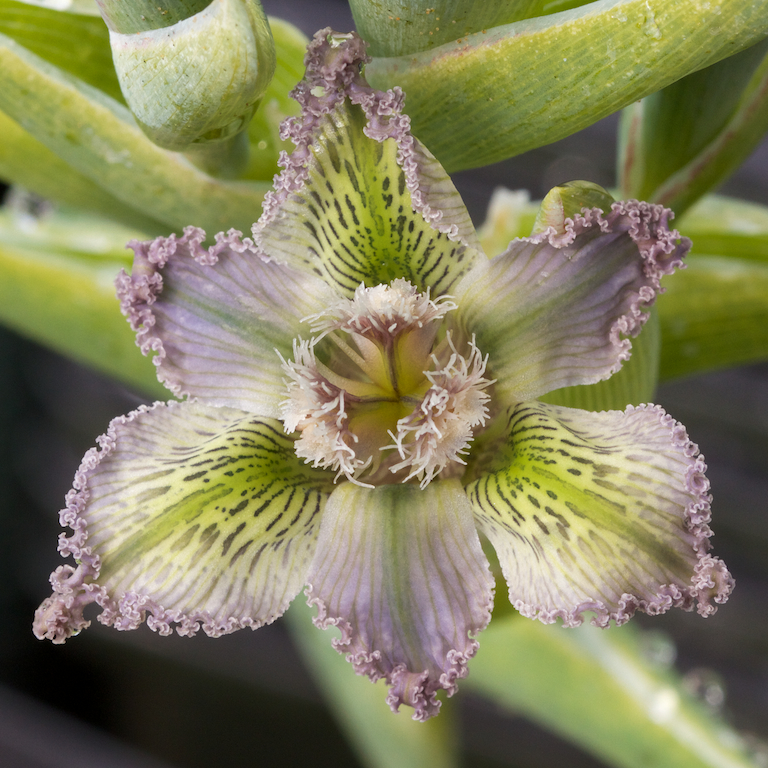 It was the first year I grew ferrarias.  They are spectacular in every respect.

Nearby and almost at the same time as  the ferraias was a delicate oxalis that was especially charming seen from the side and rear. 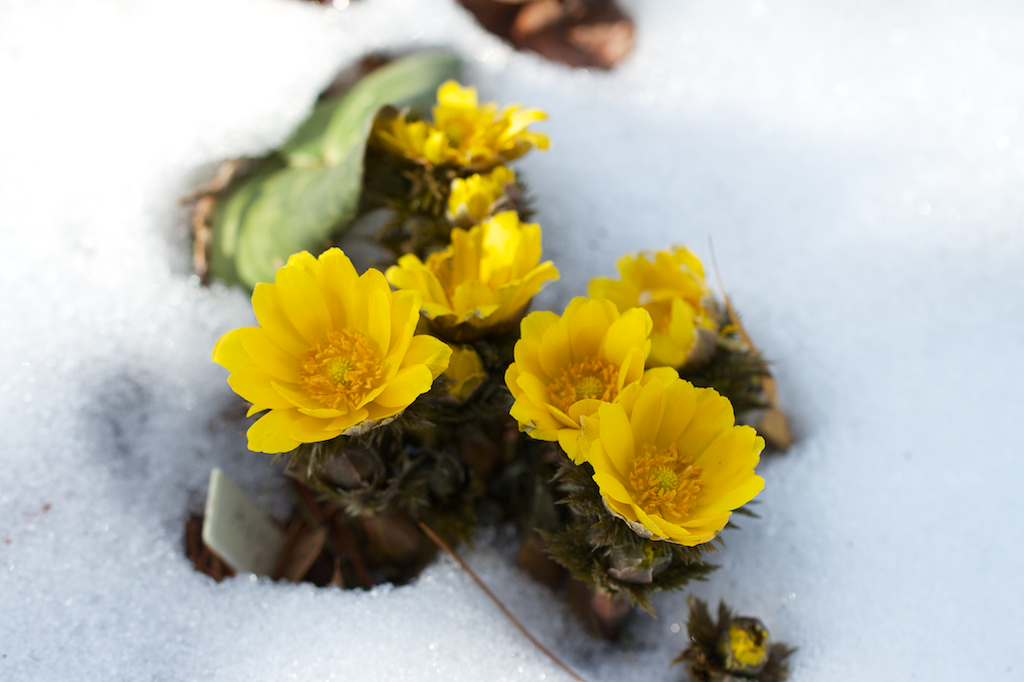 Adonis amurensis ‘Fukujukai’ in the snow

The adonis are so wonderful at combatting the snow, even as early as they come into flower.

You have to kneel down to see those blue stamens, but wow are they ever spectacular. 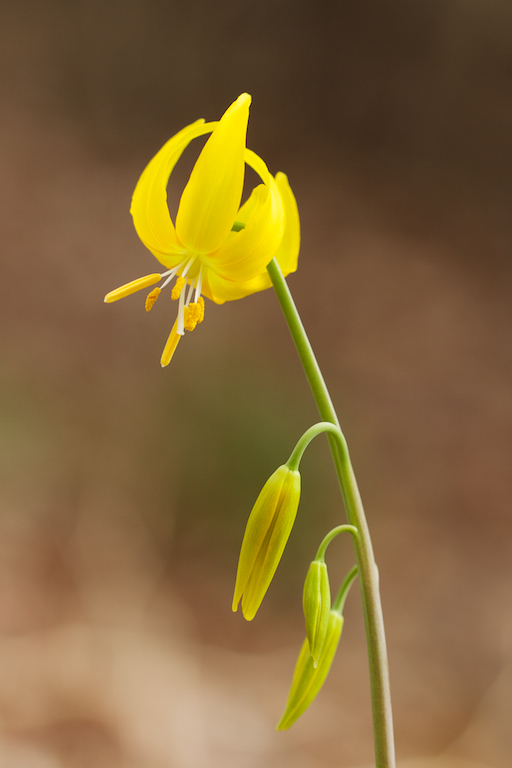 This is a Sierra Nevada endemic that is one of the parents of the commercially successful ‘Pagoda’ erythronium.  It has an almost ethereal purity.

Speaking of purity, it is hard to exceed the golden stamens on white petals featured on this peony.

Sometimes the profile of a flower is more effective than the full on in your face shot.  I wish that this were actually my rose, when in fact I took the shot while touring Maryland gardens in June with the Four Seasons Garden Club.

Then there are the flowers that are not strictly flowers that stick in your memory.  This is my favorite arisaema. 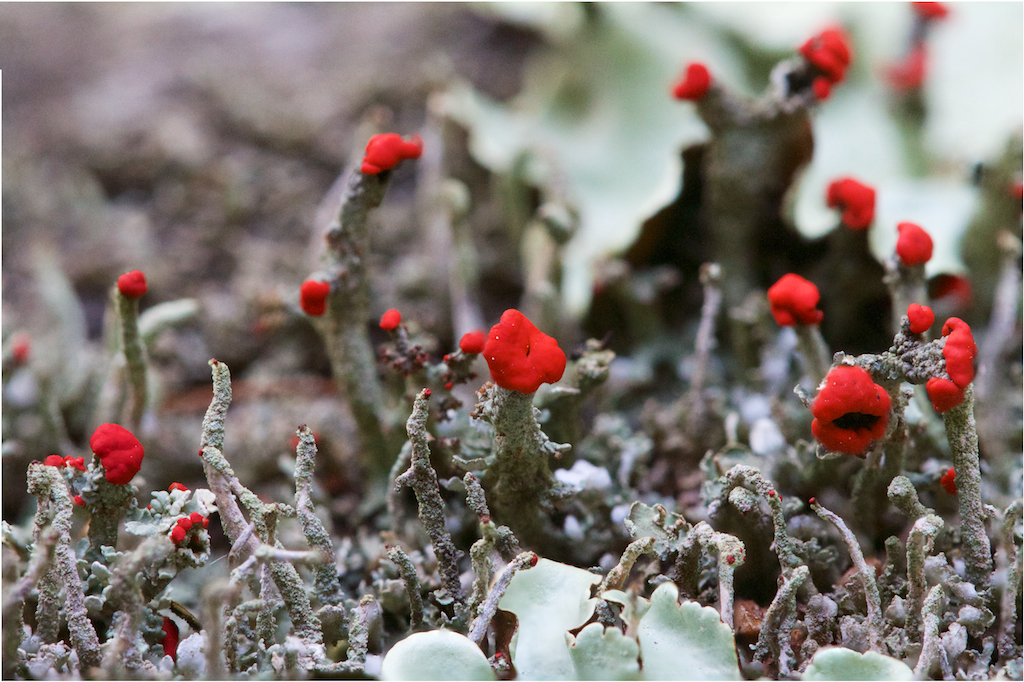 Finding the British Soldier Lichen on our garden fence post was one of the treats of the year.  Not only are they useful, but they are exceedingly beautiful if you look closely.

Queen of the Night (Epiphyllum oxypetalum)

I think it was about 10pm when I photographed this Epiphyllum in bloom.  It was busy extending an invitation to the local bats.

There are so many of these perfectly formed anemones in September that you wonder that more people don’t given them space in the garden.

One of the constraints of the Picture This photo contest is that I now have to select one of the above for my entry.  I like so many of these, but if I have to choose one it will be the Peony ‘Krinkled White’ as it appeared in June.

Well, I got up this morning all set to celebrate a month since the winter solstice.  And this is what greeted me at the backdoor.  Since the inertia of the earth’s temperature makes it tough for the sun to heat things up even though the day’s have been getting longer since December 21, eventually things catch up and it begins to get warmer each day.  Actually it turns out that the minimum for cold temperatures is January 15th for our area, so I’m ready to start recording signs of Springtime.  Instead we had near freezing temperatures and several inches of snow.

So I went into the greenhouse where I was pleased to note that several signs of Springtime were evident.  I can see growing buds on a hypericum, a freesia, a tulbaghia, a babiana, and oxalis compressa.  In addition the Oxalis cathara shared another beautiful snow-white flower (to match the outside weather I guess). 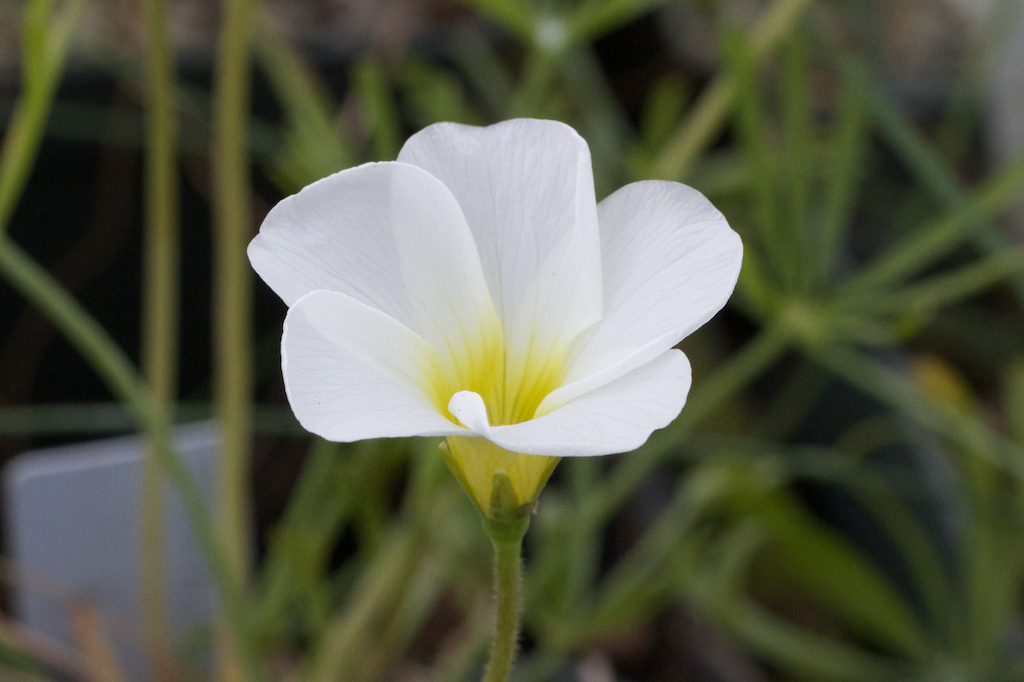 And I found a number of Narcissus pots starting to flower up.

Julia Jane is from the Atlas Mountains in Morocco and requires the greenhouse to look it’s best.  But the frilly flowers should be with us for the next month and that is surely a sign of spring. 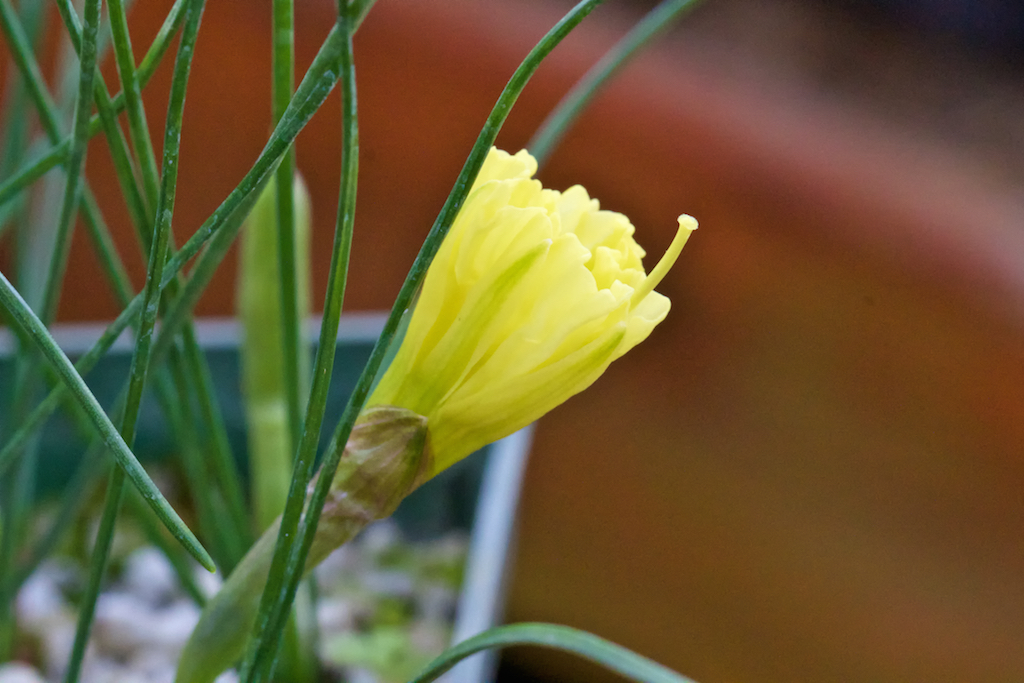 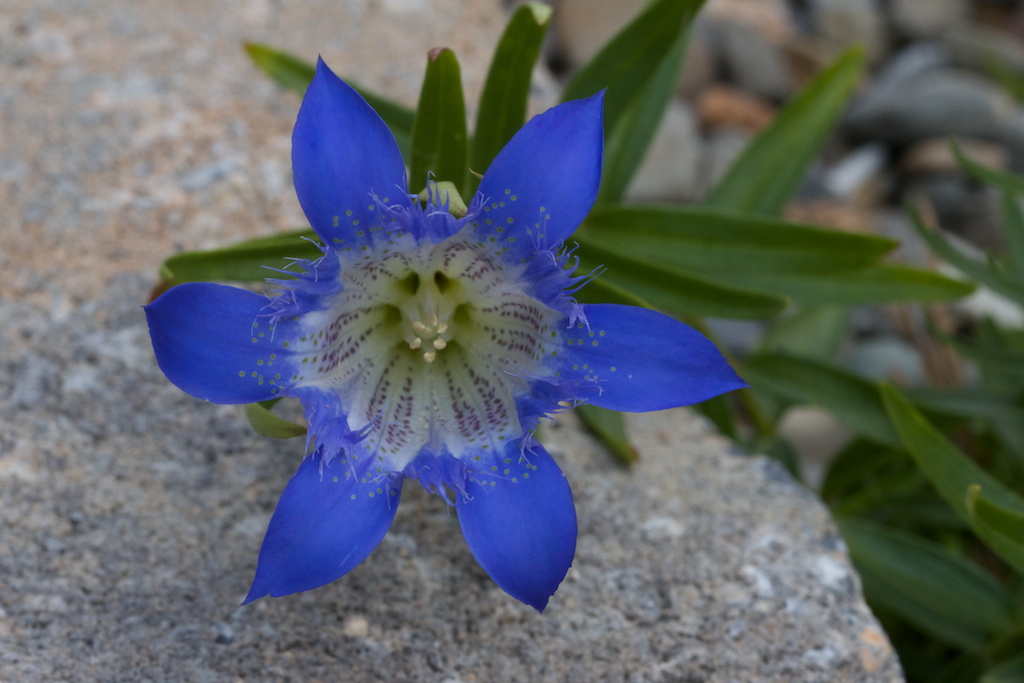 Besides being beautiful flowers, what do the above lewisia, lobelia, erodium, lily, gentian, and calandrinia have in common?  All were grown from seed distributed through the various plant societies.  Specifically I participate in seed exchanges that are conducted by The North American Rock Gardening Society, The Alpine Garden Society, The Scottish Rock Garden Club, the Pacific Bulb Society, and the Species Iris Group of North America.  Each of these organizations brings access to seeds that are otherwise very difficult to come by.  This year I’ve already received my NARGS distribution of 35 seed packets and many choice elements are going to get planted this week.  It includes Linum elegans, Bukiniczia cabulica, Eranthis pinnatifida, and many other items that you probably won’t find in the average seed catalog.  I’m still waiting for my packages from the Alpine Garden Society to see which items I succeeded in getting.  You get to choose from thousands of varieties of seeds but which ones you get depends upon when you sent in your request and whether you were a donor or not.  In the past I’ve gotten over half of my first choice varieties even though I am not a donor for the overseas societies.

Besides the wealth of interesting seeds from the seed exchanges there are also other interesting sources of unusual seeds.  We subscribed this past year to Chris Chadwell’s 29th expedition to the Himalayas in search of seeds.  Our distribution arrived this month with 50 different seed packets gathered in Nepal.

In order to bring in seeds from overseas you need to apply to the USDA for permit for a small lots of seed import permit.  And you need to be cognizant of which seeds are restricted.  I’ve found the USDA folks to be very helpful and cooperative.  I got a phone call on the day after New Year’s asking for clarification on the shipping address for my shipment from Chris Chadwell.

There are also some other wonderful sources of seeds gathered in the wild.  I think in particular of Allen Bradshaw at Alplains who specializes in seeds gathered in the western U.S.  Or Bjørnar Olsen from Norway who gathers seeds in China.  There are a number of famous collectors in the Czech Republic.  One I’ve used is Vojtech Holubec who has the most amazing pictures of his travels in asia.

More recently I was researching a Delphinium (Delphinium tatsienense to be precise) that is in my NARGS seeds for this year and I came across a very nice website in Canada (BotanyCa) that specializes in wild-collected seeds.  She has choice list of seeds for sale and a lot of information about propagation and plant lore.  Highly recommended.

The bottom line for all these ramblings is that now is the time for acquiring and planting all those unusual plants that you have been meaning to grow. 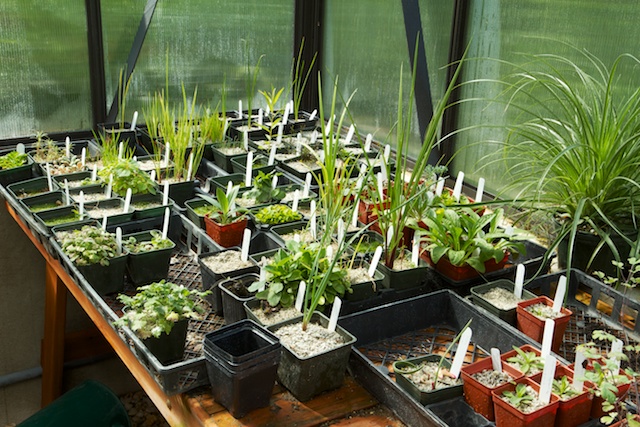 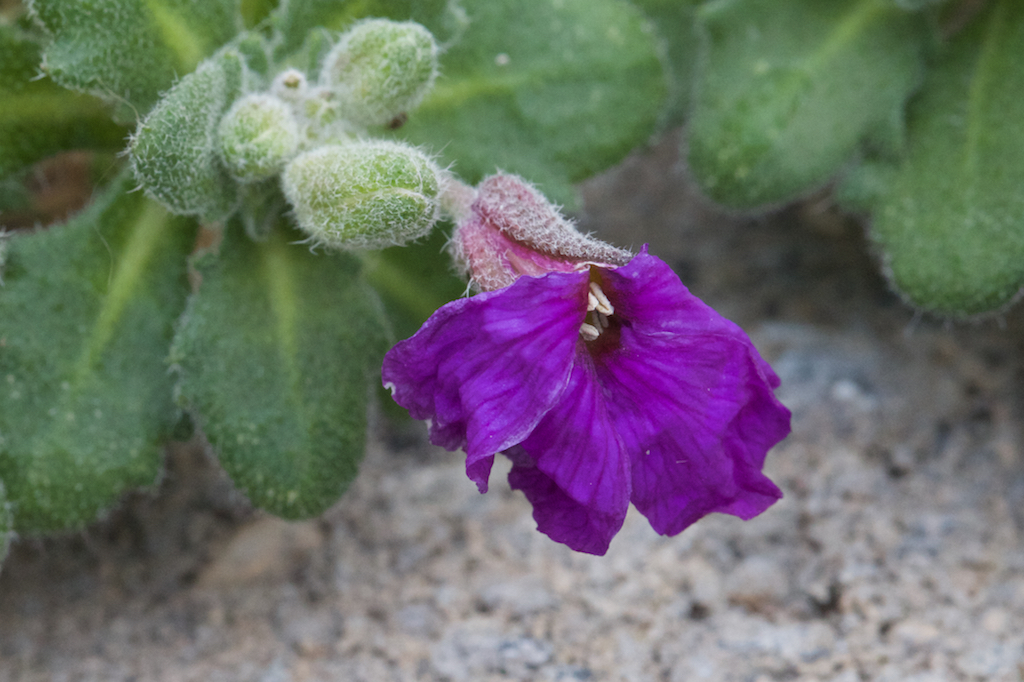 I think this little aubretia blossom aptly describes the effects of winter snowstorms and frozen ground for this Garden Blogger’s Bloom Day.  We had a couple of nights with single digit temperatures where I added another heater for the greenhouse just to make sure.  We’re now back to the twenties at night and thirties-forties daytime which is more of our typical wintertime. The flowers outside are still scarce to find though.  There’s a few violas that Beth planted last fall that are remarkably resilient despite being smashed by the snow. 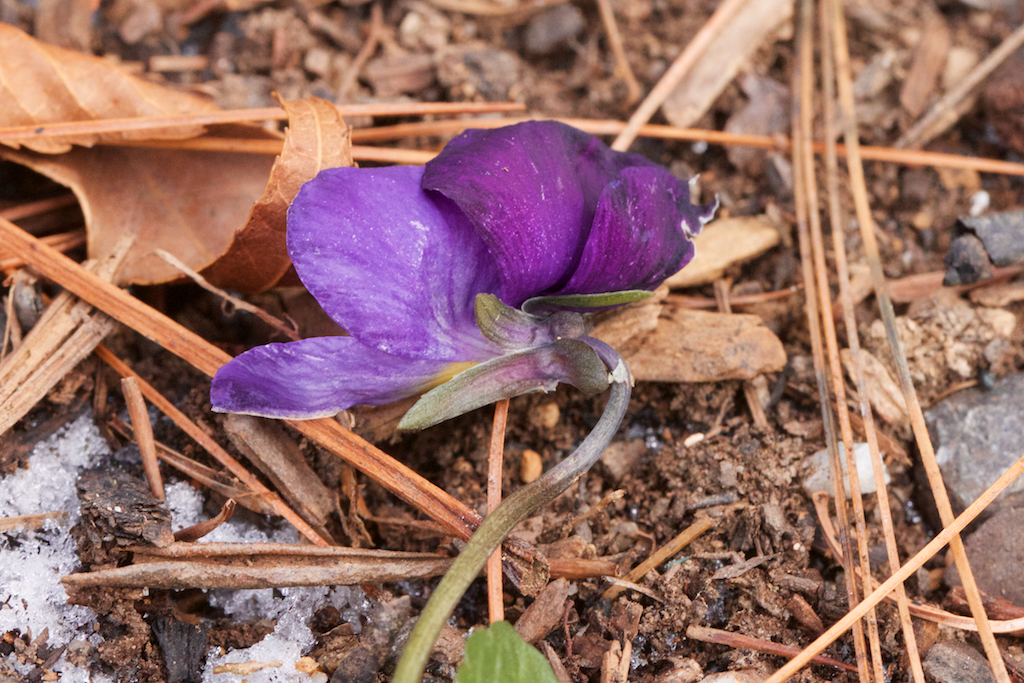 Similarly the Jacob hellebores have been smashed to the ground but are still sharing their flowers with us.

It’s not too hard to look around and find evidence that there are flowers ready to burst forth if they are given the slightest excuse.  Even the Cyclamen Coum which seems quite out of season has several buds showing. 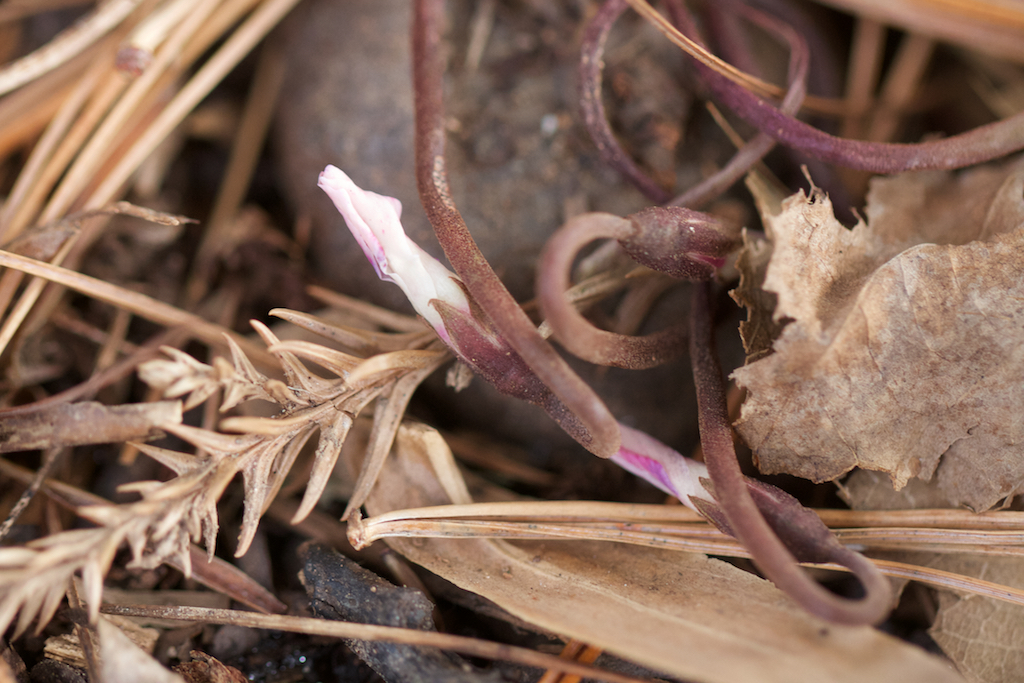 I have the slavonia pasque flower growing in one of the large troughs.  It has the most intricately hairy buds showing above the ground. 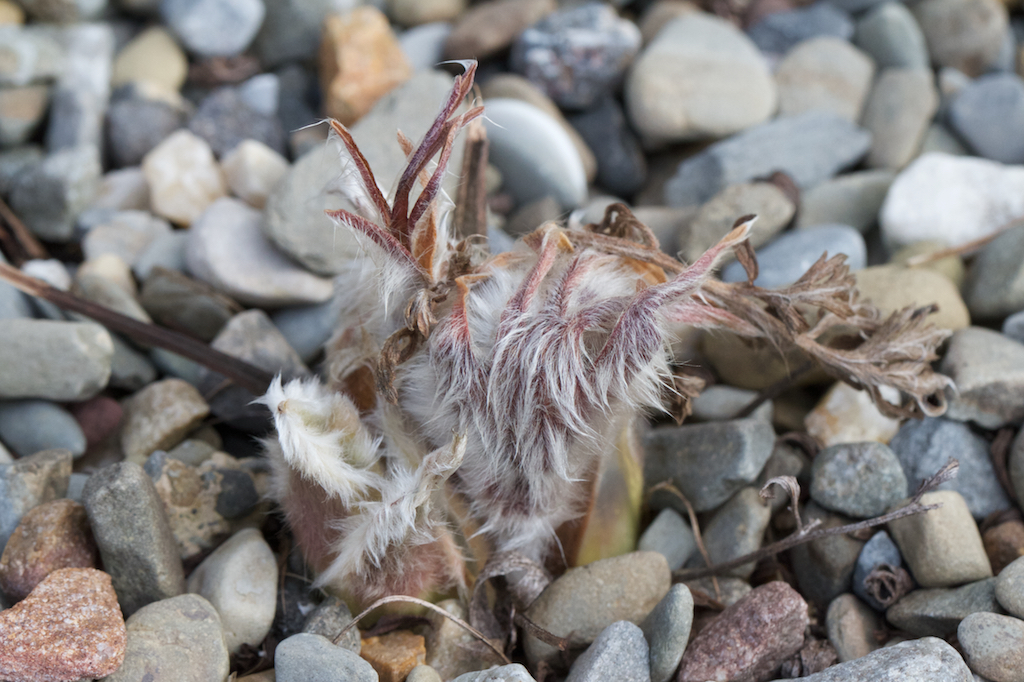 For more flowers we have to go into the greenhouse where the oxalis are still holding forth. 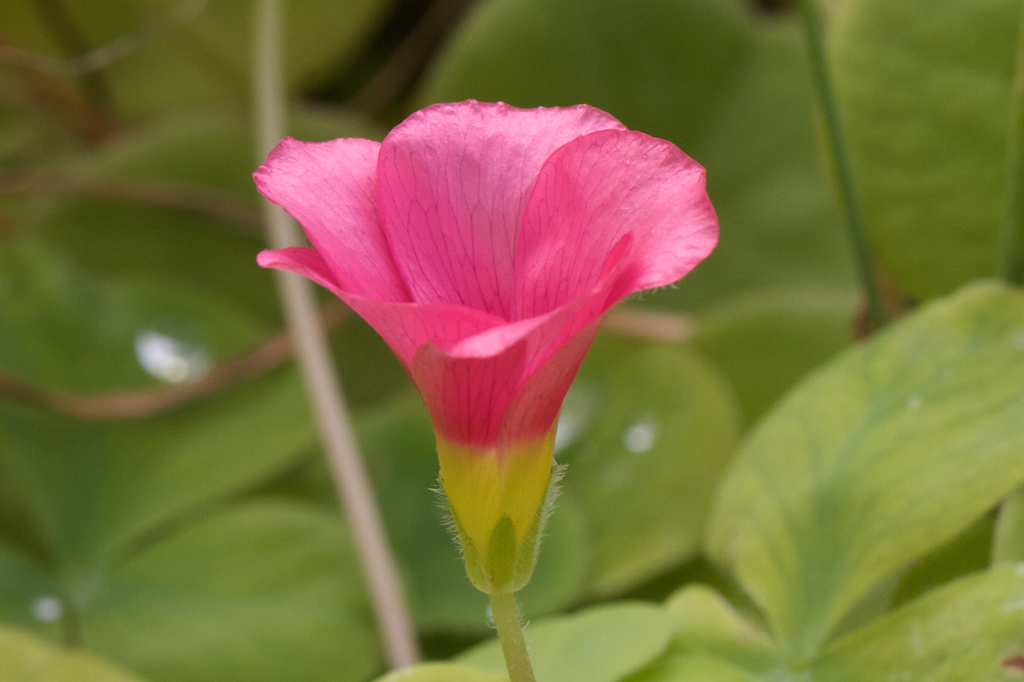 The Oxalis purpurea have been blooming since October.  More recently a lovely little Oxalis obtusa has popped up.

I’ve taken to bringing one of the oxalis into the kitchen to enjoy the unwrapping and folding of their blossoms each day.

In the house we have just one orchid in bloom. 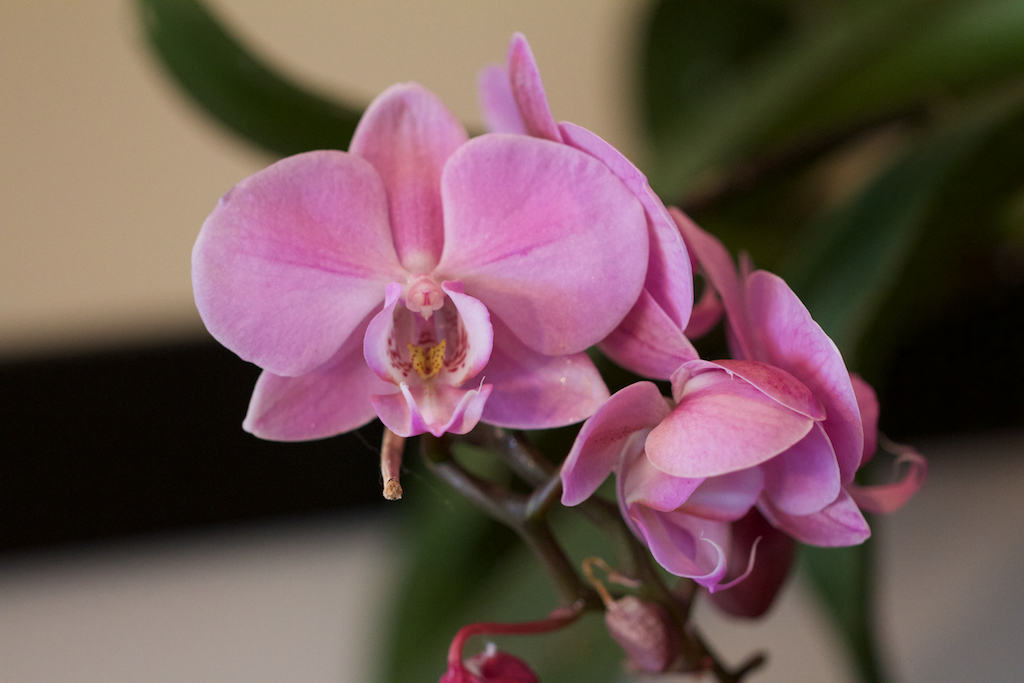 That’s it from a cold Maryland hill.  I figure we are less than two weeks from January 21 which I shall now designate officially as post-Solstice.  This is roughly the ground temperature analog to the December Solstice that marks the shortest day of the year.  I figure that from January 21 onward the ground temperature should get warmer and warmer.  I don’t want to say that I can’t wait because I actually enjoy each and every day of the march toward springtime ephemerals.  Bud by bud, shoot by shoot, and flower by flower the world will be coming alive again…

Though I do not believe that a plant will spring up where no seed has been, I have great faith in a seed. Convince me that you have a seed there, and I am prepared to expect wonders.